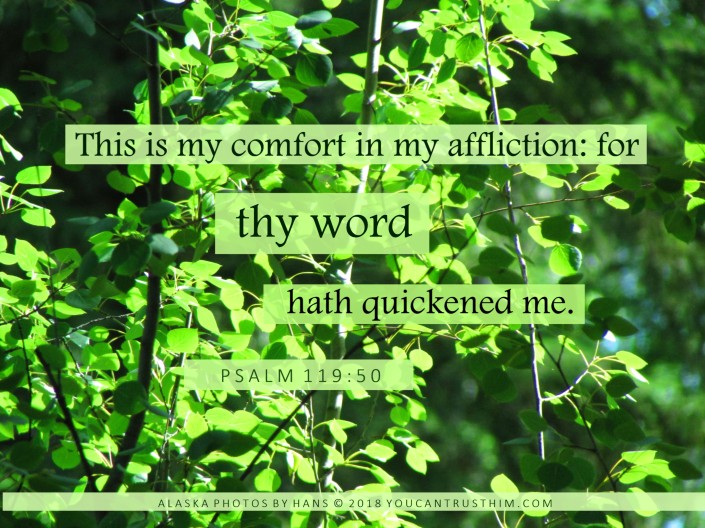 Before I was afflicted I went astray: but now have I kept thy word.
Psalm 119:67

At first we would be disposed to say that no blessings can come out of bereavements. But the grace of God has such wondrous power, that even from the saddest desolating of a home—good may come.

One blessing from the breaking of a home circle is that thus we are led to think of our better home. If things went always smoothly with us here, if no flowers ever faded, if there were never any interruption in our earthly joys—we would not think of the enduring things of the eternal and invisible world. It is when earthly good fails us—that we learn to set our affections on heavenly good. Many a man has never found his home in God—until his human nest was desolated by the storms of sorrow!

A bereavement in a household, draws all the family closer together. Love never reaches its sweetest and best, until it has suffered. Homes which never have been broken, may be very happy in love, and very bright with gladness; but, after sorrow has entered as a guest, there is a depth in the love which was never experienced before. It is a new marriage when young parents stand side by side by the coffin of their first-born.

Grief is like a sacrament to those who share it with Christ beside them. It brings them into a holier fellowship than they have ever known in love’s unclouded days. Many homes have been saved from harshness of spirit, and sharpness of speech, from pride and coldness and heedlessness—by a sorrow which broke in upon the careless life. The tones were softer after that. There was a new gentleness in all the life. Most of us need the chastening of pain to bring out the best of our love.

A bereavement ofttimes proves a blessing to those who remain, through the laying upon them of new burdens and responsibilities.

Many a son has become a man—the day he saw his father’s form lowered into the grave, and then turned away to take up the mantle which had fallen at his feet—the care of his mother, and the management of home affairs.

Many a thoughtless girl has become a serious woman, as in a day—when she returned from her mother’s funeral, and put her hand to the duties that now must be hers, if the home is to be maintained.

Many a father has grown almost instantly into beautiful gentleness, when the taking away of the mother of his little children compelled him to be to them henceforth, both father and mother. Heretofore he had left all this care to the mother. He had never done more than play with his baby when it was happy. Now he has to be nurse to it, soothing it when it cries, crooning lullabies to hush it to sleep, often walking the floor with it nights. It is hard—but the new care brings out in him beautiful qualities never suspected before.

Many a mother has been transformed from weakness to strength—by the bereavement which took her husband from her side, leaving her with little children to bring up. It seemed as if the burden would crush her; but it only brought out noble things in her soul—courage, faith, energy, skill, love—as she took up her new double responsibility.

Thus the breaking of a home—is often the making of the lives on which the sorrow falls.

Few bereavements cause more sorrow and disappointment, than when little children die. But even in these, there are consolations. That the baby came at all, was a blessing. Life was never the same in the home after that, never could be the same; it had in it a new element of blessing. Then its stay, whether it was for one day, one month, or a year, was like the tarrying of a heavenly messenger. Nothing can ever rob the home of the blessings it left there—in its brief stay. Ofttimes the influence of the beautiful life even for a few days or weeks—is greater in the home and upon the lives of the household—than that of another child who stays and grows up to mature years.

It is good for me that I have been afflicted; that I might learn thy statutes.
Psalm 119:71

Another blessing of bereavement, is the preparation for sympathy and helpfulness which comes through sorrow. We have to learn to be gentle—most of us, at least. We are naturally selfish, self-centered, and thoughtless. Sympathy is not a natural grace of character, even in most refined natures. Of course we all feel a momentary tenderness when a friend or a neighbor is in any trouble.

There is a sympathy which every gentle heart feels with sorrow. We cannot pass a funeral procession, and not, for an instant at least, experience a subduing, quieting sentiment. But the power to enter really into sympathy with one in grief or pain—comes only through a schooling of our own heart in some way. While my home is unbroken—the sorrows of other homes do not find responsive echoes in the love which dwells in my heart. Love which has not suffered, cannot fully understand another’s heart’s pain. The mother who has never lost a child, cannot deeply comfort another mother, sitting by her little one’s coffin. But when a home has been broken, its inhabitants have a new power of helpfulness. A neighbor’s mourning clothes, means more after that.

Thus it is, that sorrow in our own home—makes all the world kin to our hearts. A bereaved heart, is a wonderful interpreter of other people’s griefs. The power to be a true helper of others, a binder-up of broken hearts, a comforter of sorrow—is the most divine of all gifts! Surely, then, it is worth while to pay any price of pain or suffering, to receive the divine anointing to such sacred ministry. It was in suffering, that Jesus Himself, was prepared to be in the fullest sense and in the deepest measure—our sympathizing Friend.

When Jesus therefore saw her weeping, and the Jews also weeping which came with her, he groaned in the spirit, and was troubled, And said, Where have ye laid him? They said unto him, Lord, come and see. Jesus wept. Then said the Jews, Behold how he loved him! John 11:33-36

These are some of the blessings which come from the heart of God, into earth’s broken families—when Christ is guest there. We are sure that there is always a deep, true sympathy with us in heaven, when we are in grief—for was not God’s home broken too? He gave his only begotten Son, that into this world’s darkened homes might come blessing, healing, and salvation!

I know, O LORD, that thy judgments are right,
and that thou in faithfulness hast afflicted me.
Let, I pray thee, thy merciful kindness be for my comfort,
according to thy word unto thy servant.
Psalm 119:75-76